BBVA, the Fintech Bank and the Innovation in the Spanish Banking Industry


BBVA made it again in the headlines of digital banking as the bank announced it is purchasing a 30% of Atom Bank, a digital-only bank in the United Kingdom. As BBVA has explained to the market, it is the latest investment in M&A in Digital Banking that the Bank makes and that already sums up $285.6 million (interesting that they do not include in this list the investment of $24 million in Strands in December of 2007).

But, a part from being a new M&A transaction in Digital Banking, what strategic considerations can we take from this acquisition? There are, from my point of view, three main considerations:

This investment is in certain way similar to the acquisition of BBVA in Simple in the US in February 2014 and I believe it seeks the same: to learn to develop the Fintech Bank, the new generation of banks with an open platform that will allow the bank to connect itself with third parties and that will offer different services (of third parties) to the customers. This means a very important evolution not only of the technological platform but also of the retail banking business model. 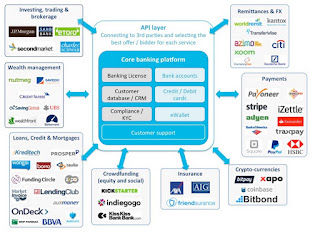 Obviously, this learning and its later application will require time that´s why these two investments are long term investments.

The interest of Spanish banking in the United Kingdom has been very important since Banco Santander acquired Abbey at the end of 2004.  Now renamed Santander UK, it is the geographic segment that contributes the most (22%) to the ordinary profit of the Grupo Santander (Spain is a 13%) and it has become one of the Big Five Banks in the United Kingdom.

This year Banco Sabadell has invested €2,350 million to acquire the 100% of TSB. With this acquisition the Banco Sabadell will have 22% of its assets outside Spain when it had only 5% before the transaction. Nevertheless, it will take the Bank two years to integrate its technological platform, time that their competitors will used to continue innovating.

The purchase of BBVA is very different because it does not increase neither the size nor the diversification of its retail operations. Unlike the Banco Sabadell that has acquired a Larger Challenger, BBVA has entered the capital of a digital-only bank that lacks the problems of legacy of the Big Five and the Larger Challengers and that will try to be a disruptor force in the British banking market. And if this is fulfilled, these digital-only banks or Digital Challengers can become mainstream banks over time

The financial data we already have about Smaller Challengers (those that have appeared right before the Digital Challengers), indicate that there is a market for these new players. According to a KPMG* report, this group of banks has obtained a ROE of 18.2%, compared with 2.1% of the Larger Challengers and a 2.8% of the Big Five. 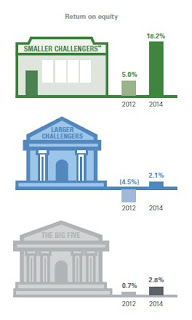 Therefore, BBVA, with a minimum investment, put a foot in the country and through a player that aspires to play an important role, first as Challenger Digital Bank, and if the disruption makes effect, as a Mainstream Bank. But we won´t see it at least in 10 years time. For that reason, again, this is a long-term investment.

3. - The innovation of the Spanish Banking Industry

Last year, in another post I asked: Where is the Innovation Headquarter of the Spanish Banking Industry? And this is how I ended that post:

Therefore, the question arise, is it possible that an “internal outsourcing” is taking place towards those ecosystems that act as poles for the attraction of talent and investment?. In the last years, the return on equity of both big Spanish banks has been above the ROE of their national peers as Banco Popular or Banco Sabadell, due to its greater margins in developing countries, mainly in Latin America. But perhaps in the future, that greater return does not come from their subsidiaries in developing countries, but from the capacity of these banks to apply in all the organisation, the innovation that their subsidiaries good fitted in the great fintech ecosystems are able to generate and to integrate in the rest of the organisation.

This movement from BBVA is deliberate as it seeks to be part of the most important Fintech ecosystem in Europe (and perhaps soon of the world). And for that reason I still think that the Innovation Headquarter of the Spanish banking industry is more Anglo Saxon than ever.