The political climate in Spain 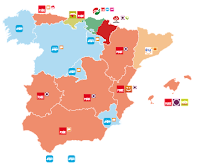 The regional and municipal elections held on 24 May delivered a highly fragmented political landscape. None of the 13 regional contests delivered an outright majority, giving radical left Podemos and moderate Ciudadanos the key to form governments in regions and city halls. These two newcomers are likely to play a critical role again in the general elections at the end of the year.

Election risk is likely to remain a factor for investors through the rest of the year. But this risk seems moderate, as
(a) most polls show a drop for Podemos over the past seven months
(b) recent events in Greece are likely to reduce some of the political appeal of Podemos, and
(c) the results of the regional and municipal elections also show that both Podemos and Ciudadanos are able to form coalitions with the two traditional parties.
Moreover, this greater political fragmentation means that broad consensus would  be required to get reforms/laws approved in parliament, what could be seen as positive in some key legislative areas.